Talyllyn Railway begins the 2020 season with school half term trains

Talyllyn Railway begins the new season by running three trains a day during the school half term week, which runs from Saturday, February 15 to Sunday, February 23.

The renowned Kings Café at Wharf Station remains open throughout the year for breakfasts, lunches and snacks and the Railway Shop next door is also open for most of this time.

During the winter months of November through to February, volunteers and staff are busy with track and other maintenance tasks without the daily services running.

However, there are special services over Christmas, with Santa Special Trains and the New Year, when Mince Pie Specials run from Boxing Day until the first weekend of January.

General manager Stuart Williams, who reported increased visitors over Christmas and New Year, is looking forward to an exciting programme of events during 2020.

March sees the popular Photographic Charters from the 16th to 18th and a local residents discount weekend on the 28th and 29th. The regular seasonal timetable begins on Saturday, April 4 and trains continue to run daily throughout the season until regular operations finish on Sunday, November 1.

Other events planned this year include ‘Stations at Stations’ a Christian pilgrimage conducted by Archbishop Barry Morgan, the Archbishop Emeritus of Wales, on Good Friday, April 10.

Other Easter events include an Easter Bunny Treasure Hunt on Easter Sunday April 12 and an extra train, the Cader Explorer, the following day. An 8.50am departure from Wharf will give the super-fit a time window from Abergynolwyn for an eight-mile ascent of Cader Idris, the 853-metre peak of which rises above the Dysynni Valley.

The early train will also return from Abergynolwyn as the ‘Monday Market special, giving local residents a chance to go by train to the popular markets, which begin on this day. A return journey is included in the single ticket price.

May brings the annual Abergynolwyn Duck Race on Bank Holiday Sunday, May 3. Thursday, May 7 see the first of seven special Heritage Trips when the railway will be running a Quarryman’s Experience.

The railway will run its original train of Victorian carriages, hosted by staff in period costume. The trips will give a unique insight into the railway’s history from its origins in the 1860s as both a mineral and passenger carrying line.

The railway is also holding a Lego Extravaganza during the spring half term holiday, from May 25–31.

On Saturday, June 13, there will be a ‘Gin Masterclass Train’, an adult themed tasting evening with professional tutors from the local Dyfi Gin Distillery at Corris Craft Centre.

Later in the month, the annual ‘Armed Forces Week’ will see events from June 20-28 and July brings the first of two the popular Beer, Cider and Gin Festivals.

The Llechfan Garden Railway, situated adjacent to Wharf Station, has an open weekend on July 4 and 5 and the hugely popular Fish and Chip Frydays run on three Fridays in July and August.

August is the busiest month on the railway with seven regular service trains running every day and several special events. These include a second Beer, Cider and Gin Festival from August 7-9, the Anything Goes Gala on Saturday, August 8, the Annual Floral Train on Tuesday, August 11, a pasta night on Friday, August 14 and the famous Race the Train on Saturday, August 15.

There is a Land Rover Series 1 Gathering at Wharf Station on Saturday. August 25, Talyllyn Loco Peter Sam celebrates his 65th birthday on August 26 and 27 and the last event of the month is Abergynolwyn Show on Saturday, August 29. Steam and show tickets may be booked from Wharf.

The remaining events of the season are Hallowe’en Steam and Scream Trains during the half term week on October 28–30 and the Christmas services, with Santa Trains on Saturday December 19, 20 and 24 and a Carol Train on Saturday, December 12.

For further details of all these events and our regular timetable please see our website: https://www.talyllyn.co.uk 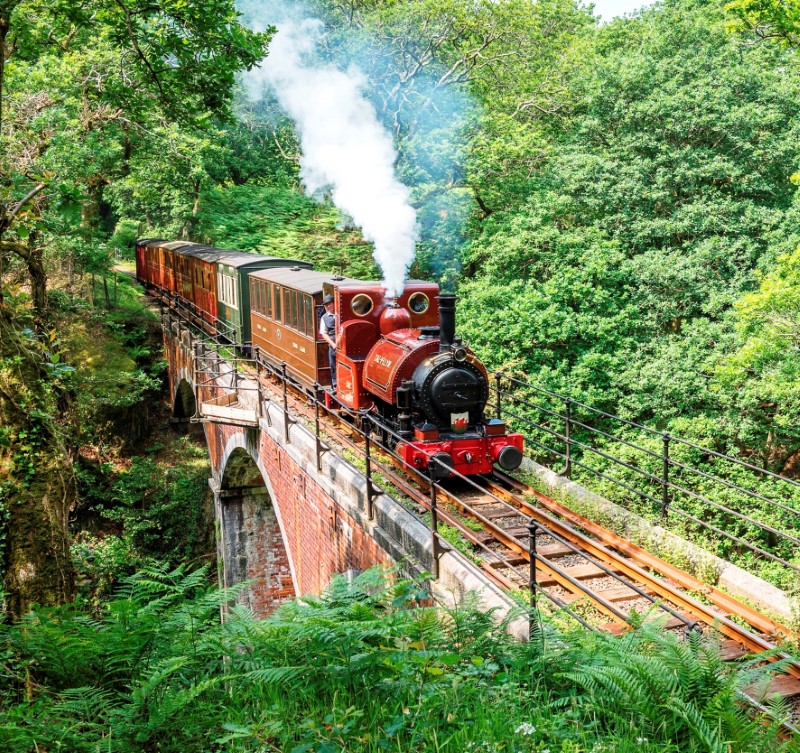